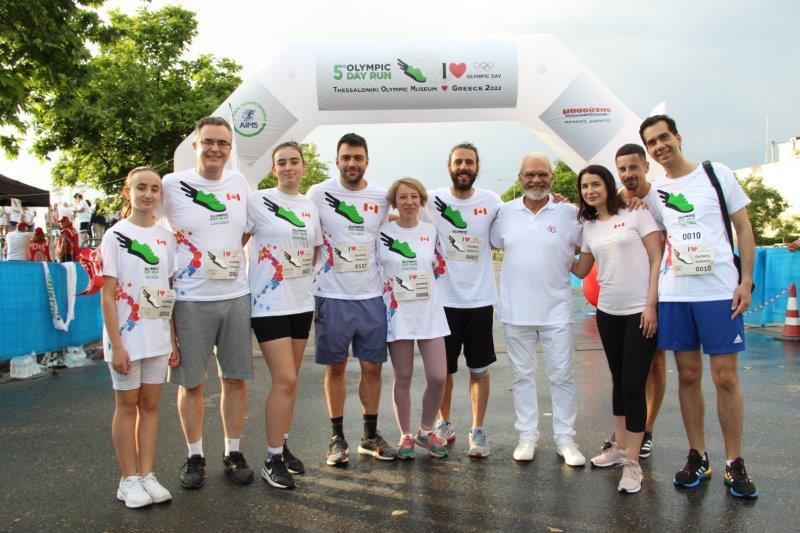 The ‘Olympic Day Run’ - organized by the Olympic Museum of Thessaloniki and the only Olympic Road Race in the country – was successfully held on Sunday, May 29, 2022. Canada was one of the official sponsors of the race, and the Consulate of Canada in Thessaloniki and Friends of Canada (FoC) hosted a team – of Canadians and friends of Canada - to run in the 5 km race.

A very big thank you goes to Team Canada leader Ioannis Vamvakas, a skates and triathlon athlete who has participated in both national and international games. Instead of racing ahead to win, he remained with his team, coaching them all on to complete the race. In honour of Canada's participation in the race, at the starting point of the race, at Zongopoulos's umbrellas on the boardwalk of Thessaloniki, Vamvakas placed his body as a horizontal mast for the suspension of the Canadian flag.

Here is the statement on the race by Pantelis Petmezas, Consul of Canada:

‘Social sensitivity, friendship and especially solidarity form the core of the Olympic Games. Canada faithfully serves these universal values and is actively participating in the 5 km race with a team of 10 people. One hundred and twenty-five years after the first Olympic Games, this Olympic event of the ‘Olympic Day Run’ honours the Olympic values that humanity holds in such high regard.’