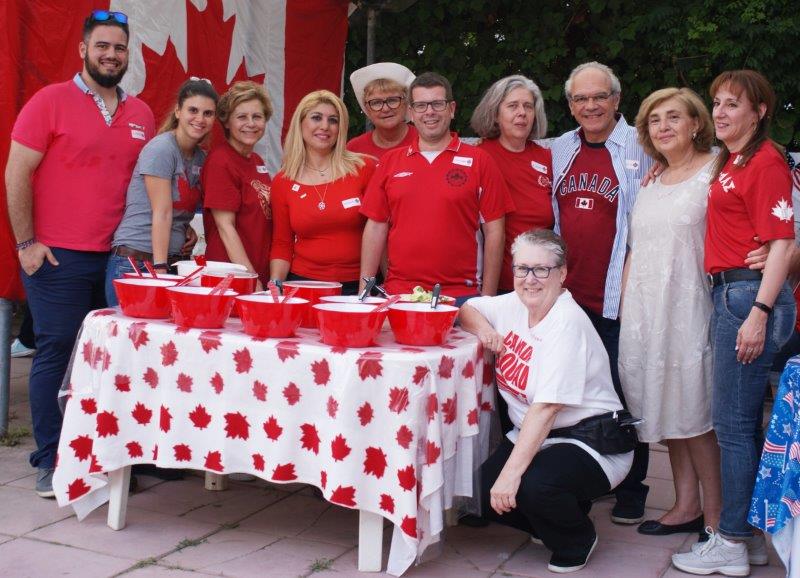 Come out and visit the CANADIAN TABLE and Friends of Canada at Thessaloniki's annual, ethnic, Food-for-Good Festival at 8.30pm at Plaz Aretsou, Kalamaria, Thessaloniki on June 10. Entrance 10 euros for 4 portions of food and 2 drinks - profits go to the Children's Village at Filiron - c u there!!!

Update: An overwhelming number of volunteers – all ages - pitched in this year to make our Canadian table a hit at the annual, ethnic Food-for-Good Festival hosted by the Women from Five Continents on June 10 at Plaz Aretsou, Kalamaria. We Canadians served exactly 164 mouth-watering servings, a combo of various meatballs and salads. Note that meatballs with sauces were a definite favourite, as well as Dora’s spicy apple chutney (we want the recipe!), which was served with the sauce-less meatballs. The salad bar was ‘cleaned out’, and the few trays of meatballs that were left were donated to the Children's Village Filiro.
Approximately 40 countries had stands at the Food Fest, and several also featured song and dance numbers on stage. This year, the Food Fest was once under the auspices of the Children's Village Filiro (http://www.paidikoxorio.gr/web/ ), which received all of the proceeds. After expenses - and with 2,000 Euro donations each in goods from Masoutis and Elinika Market plus from other sponsors - the total for the charity was approximately 19,000 Euros. Bravo mas!
ÂÂÂ Big thanks go to the myriad of Friends of Canada who participated:
• Canada table co-coordinators: Janet Koniordos and Pam Karatzas
• Volunteers who attended/set up/cooked/served/cleaned up (alphabetically – Maria did diligent recording, but apologies if we inadvertently forgot someone!): Elizabeth Adamidis, Olga Avramidou, Kay Bash, Nancy Camche, Melody Chuang, John and Kathryn Coutsocostas, Stelios Karatzas, Stavros Krezas, Thodoros and Maria Maniakas with Eleftheria, Giannis Paleokostas, Eleni Petmeza, Maria Stefaidou, and Sotiria Stefanidou
• Canadian consul in Thessaloniki: Pantelis and Dora Petmezas
• Canadian embassy staff: Stephen El Azab (Counsellor and Consul), Areti Velissariou (Senior Consular Program Officer) and Helena Dadami (Consular Program Officer/Citizenship and Passport)

EVENT PHOTOS
GO TO PHOTO GALLERY>
Thanks to Kathryn Lukey-Coutsocostas for taking most of the photos!