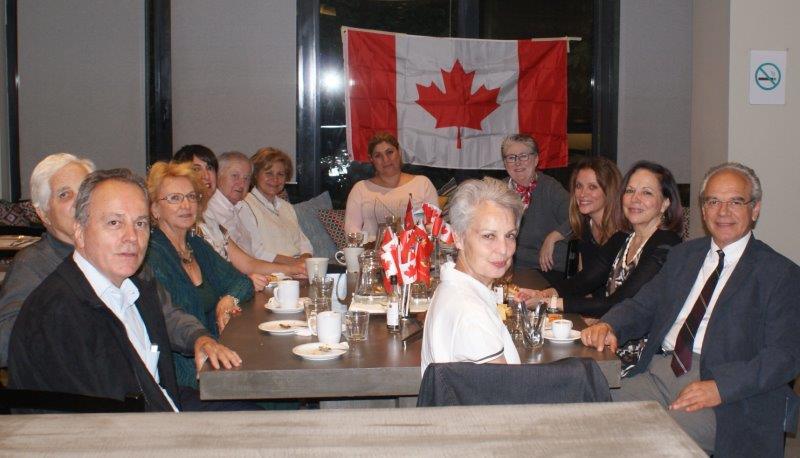 RSVP: Pls email the number in your party to This e-mail address is being protected from spambots. You need JavaScript enabled to view it by Saturday, May 20
Cost: Order your own drink and/or snack
Style: Casual first-come-first-seated/served

We’ll also be discussing plans for our Canadian table at the upcoming ethnic Food-for-Good Festival!

UPDATE: Canada Night was once again a hit! We met on May 22 at Le Palace Art Hotel in Thessaloniki, and enjoyed the presence of Honorary Consul of Canada, Pantelis Petmezas, & Dora Petmeza, as well as the president of the Greek Canadian Multicultural Association of Kastoria, Sakis Gkimourtzina
Everyone was given two door prizes, so a big thanks to the sponsors: the Canadian embassy & Thessaloniki consulate (for 150th Canadian anniversary pins) and FoC member, Anita Zgrablic (for golden Canadian coins, chocolate, that is!). We’d also like to thank Le Palace Art Hotel (https://lepalace.gr/ ) and its General Manager, Dimitris Kioukas, for generously sponsoring a wide array of tasty treats. Also, a big thanks for Alex Kondra for bringing special 150-year-anniversary table flags from Canada for us!
Janet Koniordos, our Canadian table coordinator for the annual, ethnic Food-for-Good Festival, invites you to email us at This e-mail address is being protected from spambots. You need JavaScript enabled to view it if you’d like to participate. You can help out by bringing a pan of any kind of ready-to-serve meatballs, as well as a salad. Note that people like meatballs with sauce, and exotic salads! Bring them around 8pm to Plaz Aretsou, Kalamaria on Sunday, June 11. This year, the Food Fest is under the auspices of the Children's Village Filiro (http://www.paidikoxorio.gr/web/ ), which will also receive the proceeds.