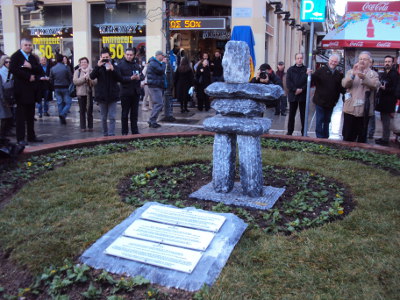 Friends of Canada was honoured to be invited to attend the inauguration of the Park of Canada in Thessaloniki on January 25 by Mayor Yannis Boutaris, Deputy Mayor for Quality of Life Konstantinos Zervas, and Canadian Ambassador Robert w. Peck. The park, at the junction of Ag. Sofia St. and Mackenzie King St., commemorates the Canadian people’s support and solidarity to the Greeks throughout the German occupation during WWII, via the dispatch of humanitarian aid for the Greek people’s survival. The INUKSΗUK points towards Ottawa, symbolising the fellowship between the two cities.

NAMING OF THESSALONIKI PARK. From the Friends of Canada Informal Canada Day Celebration greeting given by Honorary Consul of Canada to Thessaloniki, Pantelis Petmezas, July, 2013:
…I would like to invite you all to remember an event of solidarity of the Canadian people towards the Greek nation, a fact that has marked the sincere relations between the two nations and was the focal point for the establishment of diplomatic relations between Canada and Greece 70 years ago.
This historic fact has been connected to a historic person, Canada’s Prime Minister from 1939 to 1945, William Lyon Mackenzie King. I am referring to the Canadian people’s support and solidarity to the Greeks throughout the German occupation during WWII, via the dispatch of humanitarian aid for the Greek people’s survival.
By March 1941, almost half a million dollars had been gathered, wheat, medicine and other necessities under the auspices of the «GREEK WAR RELIEF FUND», a pan-Canadian Organization that motivated a lot of people in 66 Canadian cities with the support of Jackson Dodds, Honorary Consul of Greece to Montreal at the time.
The challenge was however how to actually send the humanitarian aid to the isolated Mediterranean Sea in wartime. Prime Minister Mackenzie King, who had approved of the aid, also catered to its dispatch realization. He secured the consent of the German Occupation powers to deliver big quantities of wheat to the Greek people through neutral commercial vessels.
It was August 7th 1942 when the Swedish ships «FORMOSA», «EROS» and «CAMELLIA» departed from Montreal with Greece as their final destination. On board the first one is Archbishop Athinagoras who blessed the vessels and their cargo. From then on a several ships sailed to Greece carrying provisions for the Greek people.
It was an expedition full of passion and love for Greece; a unique achievement that demonstrates in the most vivid way the sense of solidarity among nations. But then again, this is Canada!
The municipality of Thessaloniki named a street in Thessaloniki after Prime Minister Mackenzie King in his honor; it is the very well-known Mackenzie King Str in Agia Sofia Square.
Seventy years later, the Canadian Ambassador to Greece, Mr. Robert Peck, asked the Mayor of Thessaloniki to rename the park in this very square to the «Park of Canada», in order to revive this memory - and the Mayor was pleased to accept the proposition. Two flags will be flying in the Park, those of Greece and Canada, and an INUKSΗUK sculpture will be commissioned for the park; it is a sculpture of historic importance for Canada and bears an Inuit word meaning “Image of Man’s Spirit”, symbolic of our dependence on one another and the importance of strong relationships.
I am very happy about this and indeed very pleased for my small contribution towards the realization of this idea, which I believe will materialize by September at the latest. It is something that will survive forever in memory of the excellent relations between the two countries.

Go to gallery>
Thanks to Kathryn Lukey-Coutsocostas for taking most of the photos!