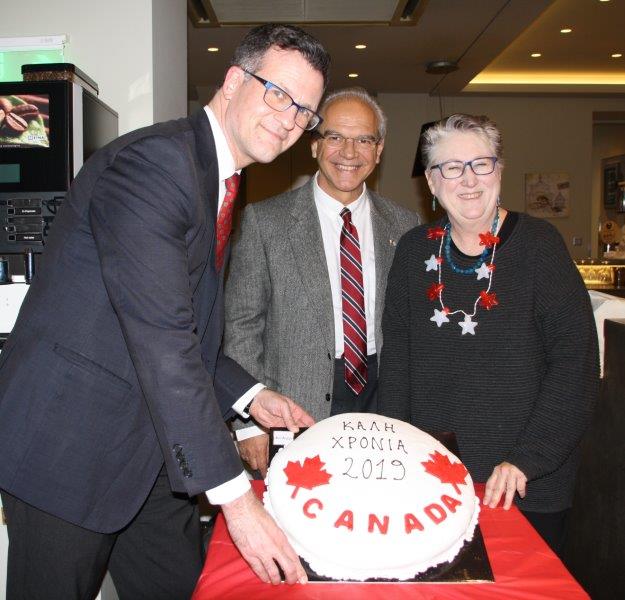 CONSULAR INFO SESSION & VASILOPITA - in the presence of the Canadian ambassador

The Consulate of Canada in Thessaloniki,
in cooperation with the Hellenic Canadian Friendship Association,

Invite you to the traditional vasilopita cutting,

on Saturday, January 26th, at 18:00, at “Le Palace Art Hotel” in Thessaloniki
(https://lepalace.reserve-online.net/about)

In addition, the Consular staff of the Embassy of Canada in the Hellenic Republic will also hold an open information sessionÂÂÂÂÂÂÂ for the Canadian citizens who reside in Thessaloniki and the rest of Northern Greece
‘Travelling abroad? Travel smart, travel safe!’
Entrance is free. RSVP is required – please email your name (and the names of your guests) to This e-mail address is being protected from spambots. You need JavaScript enabled to view it Â by Wednesday, January 23.
We’re looking forward to your participation!

For information, you may contact the Consulate of Canada in Thessaloniki at 2310-256350.

UPDATE. What do you do when the guest speakers can’t land due to the fog? Play the FoC ‘New Year’s Resolution’ Game, of course!
But let’s backtrack: The Vasilopita Cutting & Consular Information Session at the Le Palace Art Hotel, Thessaloniki, on January 26, 2019.
Co-host Pantelis Petmezas, Canada’s Consul in Thessaloniki, greeted a good-natured, standing-room-only crowd, followed by his counterpart, Kathryn Lukey-Coutsocostas, the Hellenic Canadian Friendship Association’s coordinator. The newly appointed Ambassador of Canada to the Hellenic Republic, Mark Allen (who fortunately had been able to land earlier that day), spoke next, quickly charming the attendees with his friendly manner.
The information session by our ever-helpful Canadian embassy consular staff was replaced by our infamous FoC New Year’s activity: everyone wrote down something they had wanted to change about themselves in 2019. Eight lucky winners – with responses like ‘just smile more’, ‘start climbing mountains again’, and ‘eat less junk food at nighttime’ (so it’s ok in the daytime?!) won an array of prizes.
The main vasilopita was then cut, with the ‘ New Year’ winning the flouri (lucky coin). It was awarded to Amalia Gkimourtzina who represented the Kastoria guests. As for the individual vasilopitas, Leslie Szamosi was the lucky recipient!
Guests were reluctant to leave, but eventually everyone, including representatives from the Greek Canadian Multicultural Association of Kastoria and the InterNations ‘Thessaloniki City Trotters Group’, left, basking in the light of new and renewed friendships.

The Hellenic Canadian Friendship Association would like to thank:
FELLOW COLLABORATORS: the Canadian ambassador, the embassy and the Consulate of Thessaloniki

PHOTOS: by Vasilios Karpathios for the Consulate of Thessaloniki, Katherine Bash, Kathryn Lukey-Coutsocostas

VASILOPITA PRIZE: the Consulate of Thessaloniki (for two 2019 medallions)

EVENT PHOTOS
GO TO PHOTO GALLERY >
Thanks to Kathryn Lukey-Coutsocostas, Vasilios Karpathios, and Katherine Bash for taking the photos!